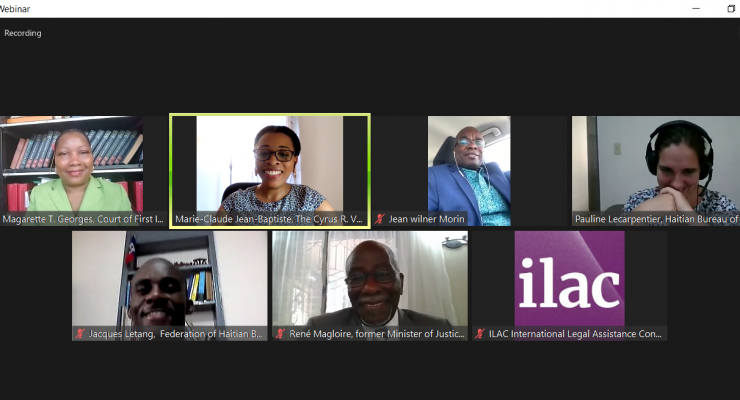 The Vance Center and the International Legal Assistance Consortium (ILAC) presented the findings of a study on the rule of law in Haiti at a webinar this month.

The study, which aimed to identify challenges and opportunities for strengthening the justice system and supporting the judiciary and legal profession, took place from February through July 2021 through a series of virtual interviews with key actors from the justice system, including the Ministry of Justice, judges, bar associations,  and representatives of civil society and the international community.

The study revealed that the human rights situation in Haiti has deteriorated significantly and the government has failed to stem the rapid rise of armed gangs and the ensuing chaos. The insecurity and violence have further weakened an already struggling justice system. Judges and lawyers have not been spared the insecurity, and courts had to close.  The independence of the justice system is under attack in ways never before seen. Meanwhile, prisons continue to fill up as pre-trial detention rates reach historic highs and the implementation of the new legal aid system and new criminal codes is delayed. The country also faces an unprecedented constitutional crisis with its three branches of government amputated.  The murder of President Jovenel Moïse and the subsequent earthquake in August have further plunged the country into political instability.

The webinar, presenting the study’s findings and recommendations, featured key actors from the judicial system, the legal profession, and civil society, including a keynote address by Judge Jean Wilmer Morin, President of the National Association of Haitian Judges. Additional speakers included: Jacques Letang, the President of the Federation of Haitian Bar Associations; Pauline Lecarpentier, Secretary General of the Haitian Bureau of Human Rights; Judge Magarette T. Georges, Investigating Judge of the Court of First Instance of Fort-Liberté; and, René Magloire, former Minister of Justice and Public Security of the Republic of Haiti.

All of the panelists agreed that the justice system in Haiti is not functioning, and as a result access to justice in Haiti cannot be guaranteed, resulting in impunity and arbitrary detention. Throughout the discussion, the panelists highlighted the importance of not only strengthening judicial institutions, but also combatting the deteriorating security situation, as it directly affects the functioning of the judicial system at its highest levels, including the Court of Cassation.

Panelists also discussed the need especially to support women in both the legal profession and the judiciary, as they are severely underrepresented in the justice system. Panelists from both the judiciary and civil society emphasized the importance for the state to have the political will to make the necessary investments to support the functioning of the judicial system, including speeding up the implementation of the legal aid program and penal law reform.

The recording of the webinar is available here: https://www.youtube.com/watch?v=ZMBbIrWKyQI.

The report detailing the findings and the recommendations of the study, published by the Vance Center and ILAC, is available in English and French.

ILAC, a consortium of more than 50 legal organizations from all over the world, brings together their collective expertise to help rebuild justice systems in countries transitioning from conflict to peace and democracy. The Vance Center has participated since 2013, and Marie-Claude Jean-Baptiste, Vance Center Programs Director, serves on ILAC’s advisory council.