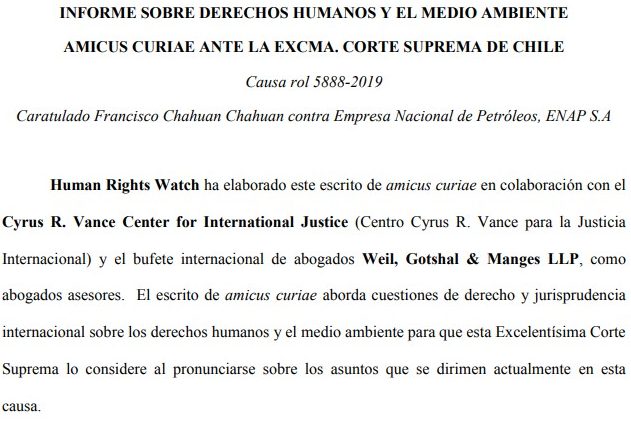 The Chilean Supreme Court handed down a historic ruling in an appeal brought by the residents of the towns of Quintero and Puchancaví, where pollution caused the hospitalization of over 1,300 people. The Court found that the Chilean government violated national and international law in failing to prevent the pollution. In reaching its decision, the Supreme Court accepted an amicus brief prepared by the Vance Center and Vance Center Committee member Rick Levine and his colleagues from Weil Gotshal & Manges on behalf of Human Rights Watch.

Quintero and Puchancaví are located in what is known as the “sacrificial zone”, a region of intensive industrial development with little environmental regulation. The Chilean Supreme Court ruled that the Chilean President and government agencies violated national legislation and the Chilean constitution by failing to prevent, and adequately respond to, a toxic gas cloud which poisoned hundreds of residents in August-September 2018. On one day alone, 50 students and teachers at a local school required treatment.

Significantly, the Supreme Court also anchored its decision in obligations arising from international treaties such as the “Stockholm Declaration” and “Basel Convention”. These instruments were widely cited in Human Rights Watch’s amicus brief arguing that international law should apply in the case.

In a sweeping judgment, the Supreme Court made 15 orders against the government, including requiring more careful inspection and monitoring of toxic chemicals, improving emergency and evacuation plans, and filtering and reducing chemical emissions. The Court gave the government a deadline of one year to comply. Legislators in the Chilean Senate have established a body that will oversee the implementation of these measures. Environmental organizations and others will be watching closely to ensure that the government complies with the Supreme Court’s decision.