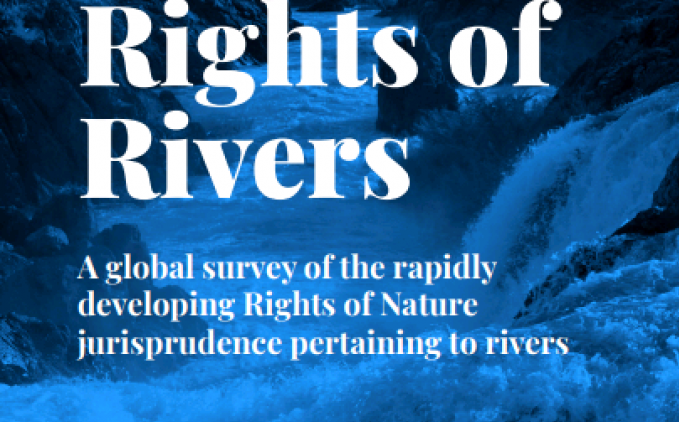 The Vance Center Environment Program, together with the Earth Law Center and International Rivers, has authored a comprehensive report on the “Rights of Nature” around the world. “A global survey of the rapidly developing Rights of Nature jurisprudence pertaining to rivers” launched at an online event, featuring several prominent experts, including Justice Jorge Ivan Palacio of the Constitutional Court of Colombia. Reports of the event appeared in media outlets around the world. Both the report and a video of the launch can be found online.

Recognition of the “Rights of Nature” has become increasingly common over the last 12 years. Drawing on developments in 14 different jurisdictions in five continents, the report tracks the growing trend of courts, legislatures, and agencies recognizing the legal personality of rivers and other natural phenomena.

The rights of rivers have received recognition in many cases. Ecuador’s Constitution provides that Nature has the right to “integral respect for its existence and for its maintenance and regeneration”, while recent legislation in New Zealand has recognized the legal personality of the Whanganui River. Apex courts in Colombia and Bangladesh have issued landmark judgments that recognize the rights of rivers, impose significant obligations on government agencies, and set up governance and monitoring institutions. Rights of Nature are now a practical feature of environmental law in many countries.

The Vance Center report emphasizes that while Rights of Nature vary in expression across jurisdictions, they share several features. First, Rights of Nature often give rise to relaxed standing requirements. Standing (or the right to sue) is notoriously difficult to establish in environmental cases, where harms are dispersed across many different victims. Rights of Nature often resolve this issue by allowing a large class of plaintiffs to bring claims on Nature’s behalf.

The report is premised on the expectation that its recommendations and case analyses will benefit local coalitions across the globe pursuing the Rights of Nature, especially on behalf of threatened rivers.