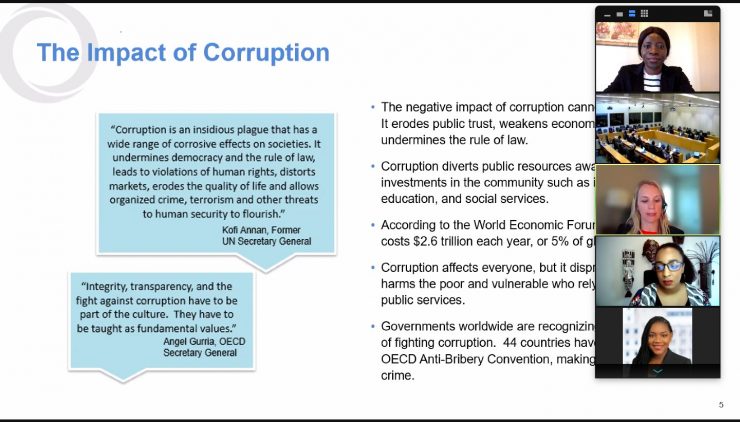 The Vance Center and the International Center for Transitional Justice convened a workshop for  30 judges in the Gambia, focusing on the importance of transitional justice in fighting corruption and economic crimes. The workshop manifested the judiciary’s effort to promote good governance, build confidence, and strengthen its capacity.

With a population of 2 million, the Gambia is undergoing a concerted, critical transition from the 22-year autocratic rule of Yahya Jammeh. The Janneh Commission of Inquiry on Economic Crimes began in July 2017, and the Truth, Reconciliation, and Reparation Commission became active in January 2019, shedding light on the human rights violations committed during Jammeh’s dictatorial reign from 1994 to 2017.

As the commissions approached the end of their work, the workshop aimed to reinforce the capacity of judges of the Supreme Court, Court of Appeal, and the High Court, as well as the Chief Magistrate, and Chief Sheriff of the Gambia, to adjudicate transnational cases of corruption and related offenses.

In the workshop’s opening ceremony, Supreme Court Judge Janneh presented remarks on behalf of Hassan Bubacar Jallow, the Chief Justice of the Supreme Court of the Gambia, explaining that corruption represents the most severe obstacle to democracy and sustainable development and underscoring the need to build allies and learn from global efforts against corruption.

Justice Mary Mam Yassin Sey of the Gambian Supreme Court presented the local perspective on tackling corruption, recommending the speedy passage of the Anti-Corruption Act and reiterating the need for the judiciary to prioritize economic crimes. She also advised that the reports of the Parliamentary Committee on Corruption, the transitional justice commissions, and other integrity institutions should be made public.

The Chubb Rule of Law Fund provided support for the workshop.