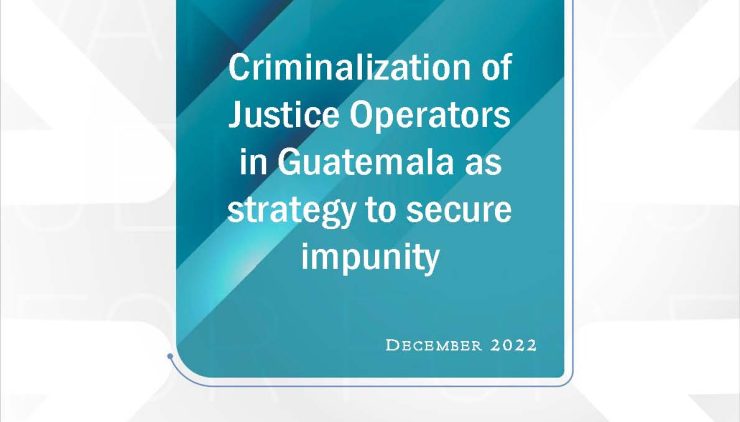 The Vance Center, in its project supporting judicial independence in Central America, reported on the systematic persecution and criminalization of judges in Guatemala based on their adjudication of large-scale corruption and human rights cases.

The report describes the strategies and patterns used to criminalize judges and prosecutors, referring to specific complaints filed against them. The report includes an analysis of the international standards for protecting judicial officials against attacks and criminalization, prepared by the law firm King & Spalding.

The report also describes the current conditions of Guatemala’s justice system in the aftermath of the government’s termination of the International Commission against Impunity in Guatemala (CICIG) and the subsequent strategy of criminalizing independent judges, prosecutors, human rights defenders, and journalists who contribute to the fight against impunity in the country.

The report also identifies trends in these attacks revealing their objective to curtail corruption and human rights investigations. For example, most complaints against judges and prosecutors are filed by the very individuals under investigation or their family members.  The report also describes how these complaints are unsubstantiated, breach due process, but are repeated in great numbers to increase the chances of removing a judge, often with support from authorities such as the Public Prosecutor’s Office and the Supreme Court.

Media in Guatemala took note of the report, including El Periodico, La Hora and Epicentro.

The Vance Center prepared the report with technical assistance from the International Legal Assistance Consortium. It is available both in English and Spanish.