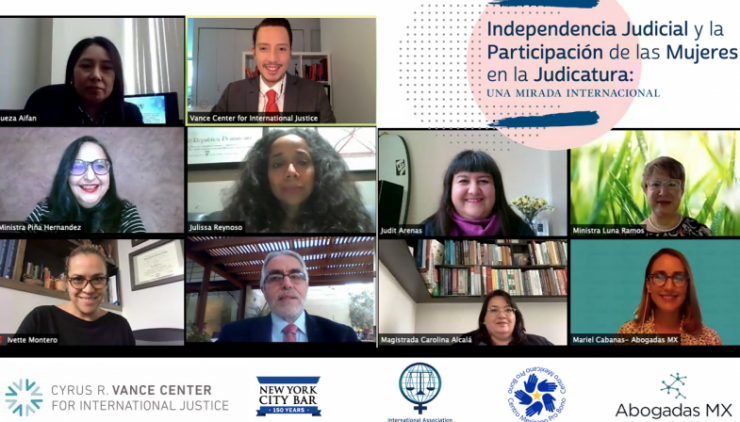 As part of the Vance Center’s efforts to advance judicial independence in the region and in particular the work of Mexican women judges, the Vance Center organized a virtual conference “Judicial Independence and Gender Equality in the Judiciary: an International Perspective”, in partnership with the International Association of Women Judges, Pro Bono Network of the Americas member Centro Mexicano Pro Bono, and Abogadas MX, the national chapter of the Women in the Profession Program.

The conference focused on a multi-jurisdictional survey and research project, conducted by the Vance Center, comparing issues of judicial independence and gender equality in the judiciary, including the selection of judges and their terms in office, case assignment systems, court assignment and career advancement, compensation and benefits, safety and protection, reporting of grievances and ethical violations, and freedom of expression. Covering Argentina, Brazil, Chile, Colombia, Mexico, Spain, and the United States, the study also addressed the legal provisions for gender equality in the judiciary, including regulations or policies to address institutional barriers to women’s career advancement.

Hon. Margarita Luna Ramos and Hon. Norma Lucía Piña Hernández focused their remarks on gender equality in the judiciary, including current efforts and challenges. Dr. Diego García-Sayán underscored the importance of United Nations and other international standards, referring to the 35th anniversary of the Basic Principles on the Independence of the Judiciary, the Inter-American Convention on the Prevention, Punishment, and Eradication of Violence against Women, the United Nations Convention against Corruption, and the Bangalore Principles of Judicial Conduct.  Judge Erika Aifan spoke about her experience as a women judge facing attacks to judicial independence in Guatemala and the gender discrimination present in the judiciary. Ambassador Reynoso spoke about the importance of judicial independence and Justice Ruth Bader Ginsburg’s  legacy as a leader among woman judges. Arenas connected the strengthening of judicial independence to the UN 2030 Agenda.

The Vance Center in October 2020 will conduct online brainstorming sessions to identify projects for ongoing engagement with Mexican judges, particularly at the state level, focusing on rules for appointing judges, assigning them cases, and regulating their judicial conduct, from the perspective of seeking gender equity and judicial independence. More information here.