Observations From the COP Climate Conference 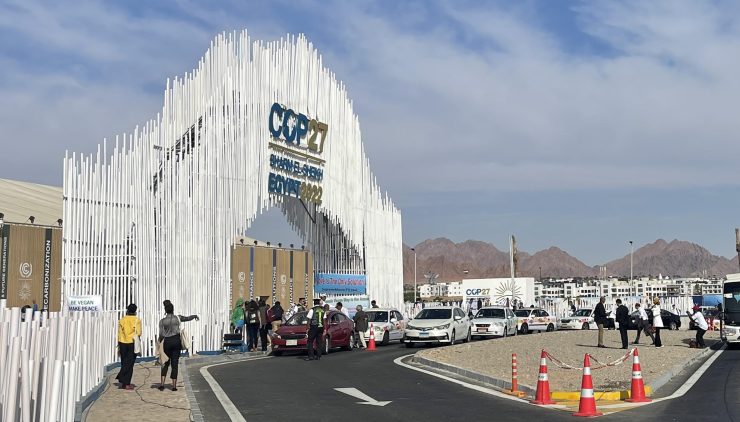 UN Climate Conferences are massive events – this year’s attracted over 45,000 delegates representing governments, NGOs, Indigenous peoples, youth activists, and businesses. While the centerpiece is the government negotiations, the annual COP conferences also offer the opportunity for collaboration across civil society. For the Vance Center, COP27 offered an important occasion to connect with existing clients, build new networks, and stay up-to-date with the latest developments in climate law.

I arrived in Sharm El-Sheikh at the beginning of the second week of the two-week conference. The second week is when the details of the final conference agreements are hammered out by diplomats, after heads of state have delivered their speeches. The five days I attended were action-packed, chaotic, and exhausting – but also enormously valuable.

The outcome of the negotiations was a mixed bag. Few commitments were made to further reduce greenhouse gas emissions, and the final text of the conference cover decision retained only weak language on the “phasedown” of coal and fossil fuel subsidies. In other areas, however, some progress was made.

A key theme of this year’s COP was “loss and damage” – compensation to be paid to poorer states which are (and will continue to be) disproportionately affected by climate change. Loss and damage is often referred to as the “third pillar” of the UN’s climate negotiations framework, along with mitigation (reducing greenhouse gas emissions) and adaptation (preparing for current and future impacts of climate change).

But historically, loss and damage has received little attention in climate negotiations as richer countries have expressed concern about the possibility of legal liability for compensation. This year’s conference was the first to address the issue squarely. Negotiations took place in the wake of devastating floods in Pakistan, which were frequently referred to by delegates throughout the conference as an example of the need for urgent assistance from richer countries.

I was able to join other civil society observers in monitoring negotiations on loss and damage, including negotiations setting up the Santiago Network, a mechanism for providing technical assistance to states affected by loss and damage. I was also able to attend high-level negotiations on the COP27 cover decision, the document summarizing the key outcomes of the conference. Significantly, diplomats for the first time reached agreement on the establishment of a global fund for loss and damage. While the details and operationalization of such a fund are yet to be worked through, this agreement was a significant breakthrough which will likely shift the focus of future negotiations.

Another prominent theme of the conference was the increasing role of human rights in measures addressing climate change. Human rights have assumed a much more prominent role in the UN climate framework. Civil society groups were extremely active in persuading states to include human rights language throughout the text.

Human rights not only provide a reason to mitigate climate change more ambitiously: they are also an important consideration in the implementation of any climate action. Measures such as forest protection, renewable infrastructure development, and assistance to affected communities must be provided in a manner consistent with the human rights of all people. Human rights were ultimately reflected in the conference cover decision, which calls on parties, “when taking action to address climate change, respect promote and consider their respective obligations on human rights”.

Importantly, the cover decision for the first time made reference to “the right to a clean, healthy and sustainable environment”, a right recently recognized by the General Assembly following a global campaign substantially assisted by the Vance Center. The importance of a rights-based approach was particularly relevant at the negotiations in Egypt, where protests were heavily restricted by the host country.

Relatedly, litigation has also become an established fixture of the climate change governance landscape. The conference offered me an opportunity to meet many of our clients and partners involved in litigation related to climate change, including several plaintiffs. Many national courts are recognizing governmental (and even private) obligations to act faster on climate change, and the United Nations General Assembly will soon consider a proposal by Vanuatu – formally launched at COP27 – to refer a case to the International Court of Justice. The Vance Center has now assisted in several cases, primarily through the filing of amicus briefs. We expect this part of our work to continue growing in the coming years. 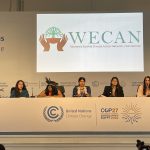 I was pleased to see Vance Center clients prominently represented at the conference, often drawing on work provided by the Vance Center and partner firms. The Women’s Earth and Climate Action Network (WECAN), with which the Vance Center has worked closely over recent years, presented a series of powerful side events and press conferences centering the voices of women from the Global South in their struggles against deforestation, pollution, and extractive industries. The Vance Center has assisted these frontline defenders with extensive analysis of the Escazú Agreement, a recently concluded treaty which protects the rights of environmental activists. Other Vance Center partners, including the Interamerican Association for Environmental Defense (AIDA) and Human Rights Watch, were also prominently represented. The conference provided an opportunity to meet with these partners, brainstorm future projects, and coordinate activities for the coming year.

The conference was overwhelming, and at times frustrating. The negotiations progressed at a snail’s pace, ranging across an enormous range of issues which were difficult to follow. The sheer size of the conference was unwieldy, with many parts of the venue feeling like a jamboree or trade fair. The restrictions on protest activities at the conference shut out many civil society voices, and the conference sessions often felt divorced from the increasingly devastating impact of global heating felt all around the world. But the event did provide the Vance Center with the opportunity to build expertise and strengthen valuable networks. The conversations at COP27 will inform much of the Environment Program’s work over the coming year, as we develop new projects to respond to the overwhelming legal need generated by the climate crisis.