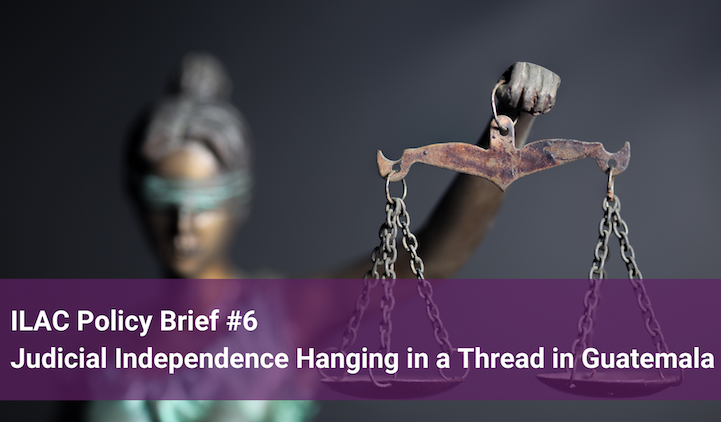 Continuing the Vance Center’s engagement in Guatemala, Latin America Policy Director Jaime Chavez Alor participated in a webinar co-organized with the International Legal Assistance Consortium, the American Bar Association, and the Law Society of England and Wales, regarding judicial independence in that Central American country.

The webinar followed the publication of the policy brief “Judicial Independence Hanging by a Thread in Guatemala”, describing the increased threat to the professional integrity and personal safety of Guatemala’s judges since the previous president ended the mandate of the International Commission against Impunity in Guatemala (CICIG). Those independent judges overseeing high-level corruption and human rights cases are the primary targets of such threats, which have contributed to diminishing trust in the judiciary and the rule of law. The policy brief concluded that further support from international actors is needed to protects Guatemala’s independent judges.

At the webinar, Judges Yassmin Barrios and Carlos Ruano highlighted the personal and professional threats due to their independent and impartial rulings in high-level corruption and human rights cases. Judge Barrios described a systematic agenda to criminalize the work of judges through bogus criminal complaints seeking to intimidate them. Judge Ruano underscored the lack of support from within the judiciary and recent Supreme Court decisions lifting independent judges’ immunity. Former Ambassador of Sweden to Guatemala Anders Kompass emphasized the importance of support of the international community. Guatemalan lawyer Alvaro Montenegro described the challenges in the current process to appoint judges, including how the different political parties are seeking ways to secure impunity for corruption crimes.

The recording of the webinar is available here.

This policy brief and webinar follow other Vance Center efforts in Guatemala, including the report Revisions to the Law on Non-Governmental Organizations, Judicial profession and conduct in Latin America for the Association of Guatemalan Judges for Integrity, a workshop for 50 judges of the association on how multinational companies conduct transnational business, and delegations of U.S. and Latin American business lawyers to Guatemala in 2013, 2014 and 2019 to examine the judicial selection process.