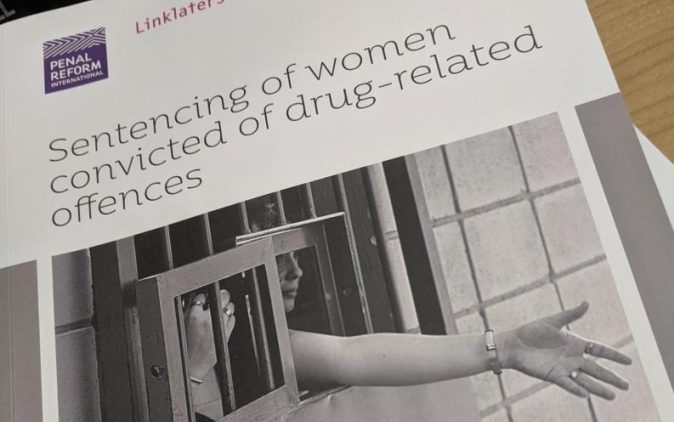 At the invitation of Penal Reform International, Vance Center Programs Director Marie-Claude Jean-Baptiste, participated in an expert meeting in London on the sentencing of women convicted of drug-related offenses. The meeting, convened in collaboration with the International Drug Policy Consortium (IDPC), brought together experts and practitioners from national and international organizations, civil society, and academia to exchange views on how sentencing for drug offences could be gender-sensitive.

Jean-Baptiste and the other experts discussed the findings of a global report that Linklaters did for PRI assessing how 18 jurisdictions sentence women for drug-related offences. The experts identified key policy gaps and made corresponding recommendations to inform the contents of an international advocacy tool that will provide support to legislators, sentencing authorities, and other criminal justice decision-makers.

Jean-Baptiste moderated a breakout session on the sentencing of women for drug trafficking offenses which focused on the neglect of mitigating factors, such as violence or abuse that women caught trafficking drugs may have suffered, and the difficulty in proving mitigating circumstances. It was also remarked that in many places judges are reluctant to implement alternatives to incarceration, often due to fear of public opinion.

Women who traffic drugs are mostly drug mules at the bottom of the trafficking chains. Harsh sentences for women are thus disproportionate to their role in trafficking and do nothing to break the drug cartels, as these women are easily replaced. Deterrence policies, including harsh mandatory sentencing, do not work to reduce drug trafficking. Women arrested for drug trafficking, mostly foreigners, usually lack access to legal representation.

The group in the breakout session recommended 1) an end to mandatory sentencing for drug offenses; 2) bias training for judges; 3) gender mainstreaming in the criminal justice system; 3) increased focus on the rights of children of women sentenced for drug offenses; and 4) more research into women’s economic exclusion, which often leads to their involvement in drug trafficking.

The Vance Center’s Human Rights Program is pursuing a three-year project to promote global collaboration on improving conditions of women’s imprisonment. The Women in Prison Project convenes women prisoners’ rights advocates from the Americas, Africa, and Asia to 1) share information about conditions of women’s imprisonment in their respective countries or regions; and 2) build capacity for improved monitoring and reporting of conditions in women’s prisons.

Examples of our initiatives under the Women in Prison Project include: