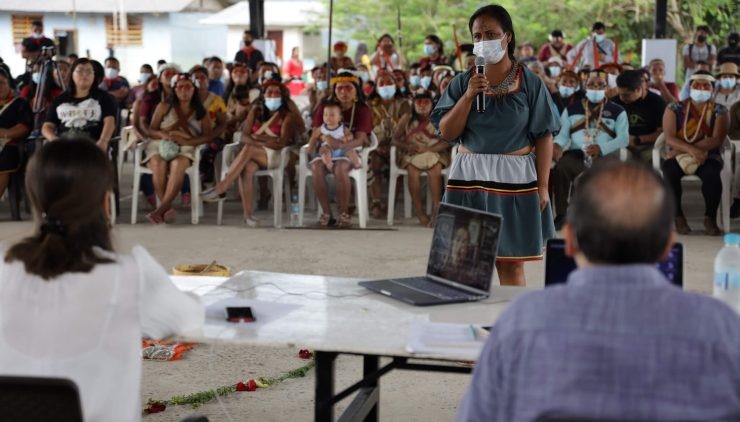 [Members of the Cofán community present evidence before the Constitutional Court of Ecuador, which traveled to their ancestral territory to hear evidence directly from the community. Photo credit: Amazon Frontlines]

The 2022 Goldman Environmental Prize for South & Central America has been awarded to two Ecuadorian Indigenous land defenders, Alex Lucitante and Alexandra Narvarez. The Goldman Prize is the world’s most prestigious prize recognizing the work of environmental activists and defenders, often referred to as the “Green Nobel”. The prize citation recognizes their extraordinary work in preventing illegal gold mining in the Ecuadorian rainforest, including their landmark 2021 win before the Constitutional Court of Ecuador. The Court’s decision extensively cited an amicus brief coordinated by the Vance Center.

Lucitante and Narvaez are leaders of the Cofán community of Sinangoe, whose ancestral territory sits at the headwaters of the Aguarico River in one of the most biodiverse parts of the world. Last year, the Cofán community achieved a significant victory before Ecuador’s Constitutional Court, where the justices recognized their right to free, prior and informed consultation in relation to activities that could harm their ancestral territories. The Constitutional Court’s decision relied on a brief coordinated by the Vance Center on behalf of Professor James Anaya, the former United Nations Special Rapporteur on the Rights of Indigenous Peoples. The brief was prepared by Vance Center Committee Founding Chair Todd Crider and Rafael M. Loureiro from Simpson Thacher, and in coordination with the NGO Amazon Frontlines.

The Cofán community – as well as other communities in Ecuador – continues to face environmental threats from petroleum extraction, mineral mining, biodiversity loss, and climate change. In a separate case, the Constitutional Court is considering a claim challenging the Ecuadorian government’s lack of response to a devastating 2020 oil spill. The Vance Center Environment Program, together with the law firm Gomez Pinzon, prepared an amicus brief on behalf of two UN special rapporteurs to support that claim.