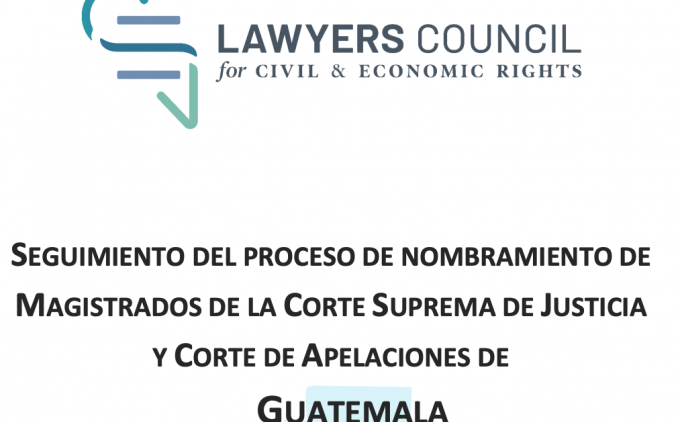 The Vance Center’s Lawyers Council for Civil and Economic Rights published a follow-up report available in Spanish analyzing Guatemala’s judicial appointments process and the new presidential proposal to amend the constitution to change the rules for appointing judges and reforming the justice system.

Under the existing appointments process, the Guatemalan Congress was due eight months ago to appoint 13 Supreme Court and 270 Court of Appeals judges. The convoluted, prolonged process, amidst allegations of undue influence and corruption, has led to a consensus among Guatemalans that the process needs modification, as the current challenges undermine the legitimacy of the judiciary and the rule of law.

The Guatemalan press took note of the Lawyers Council’s follow-up report, which presents an update on the most critical events in the judicial appointment process. It describes the announcement by the Special Prosecutor Against Impunity of a criminal investigation involving high ranking officials to influence the selection of judges and the intervention of the Constitutional Court ordering the Congress to consider the “honorability” of the candidates.

The Lawyers Council report also analyzes the Guatemalan president’s proposal of a constitutional amendment to reform the justice system and points out key issues to achieve judicial independence. Finally, the report provides a series of recommendations, emphasizing the need for an in-depth discussion with various civil society actors and judges, instead of  fast-track decision making amidst the COVID-19 pandemic.

In August 2019, a delegation of the Lawyers Council undertook an assessment of the judicial appointment process in Guatemala, following on a similar effort in Peru. Delegates met with Guatemalan civil society organizations, members of the judiciary, the Association of Judges for Integrity, officers of the Guatemalan Bar Association, media representatives, and partners of principal law firms to gather information and offer recommendations on the ongoing process. This undertaking continued the Vance Center’s previous delegations to Guatemala assessing judicial independence in 2013 and 2014.

The Lawyers Council for Civil and Economic Rights brings together private practice law professionals in the Americas to combat corruption and to support the rule of law and the work of the civil society. The Lawyers Council consists of 18 lawyers from 14 countries, distinguished in private legal practice nationally and regionally, with demonstrated civic commitment.