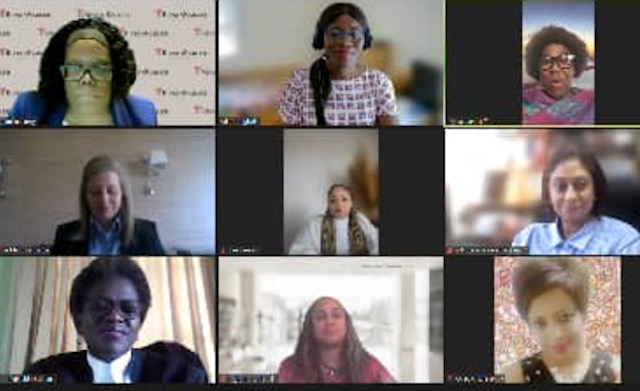 In its project Advancing Women in Workplace, the Vance Center works with young women of color to support their advancement to leadership positions in the South African legal market. In addition to creating a program to help these junior legal practitioners with mentorship by senior colleagues and surveying gender diversity in the legal profession, it is investigating surrounding issues that limit women from attaining leadership positions.

To commemorate South Africa’s National Women’s Month, the Vance Center organized two webinars to highlight and examine the implementation of the South African Code of Good Practice on Preventing and Eliminating Harassment in the Workplace (the Code), which came into effect in March 2022 and was developed in line with ILO Convention No. 190, the first international treaty to recognize the right of everyone to a world of work free from violence and harassment, including gender-based violence and harassment.

Zanile Sibya, a commissioner at South Africa’s Commission for Conciliation, Mediation, and Arbitration, provided an overview of the Code, its innovations, and its differences from its 2005 predecessor (the Amended Code of Good Practice on the Handling of Sexual Harassment Cases in the Workplace). Janine Myburgh, chairperson of the South Africa’s Legal Practice Council, reviewed existing and anticipated changes by the Council in regulating legal practitioners.

Adaobi Egboka, Vance Center Africa Program Director, moderated the well-attended series, with panelists calling for increased awareness of the Code among law firms and legal practitioners. In addition, they urged that organizations ensure mandatory annual sexual harassment prevention training for staff and new hires and implement strategies that encourage additional support to women, such as bystander and ombudsman roles in the organization.