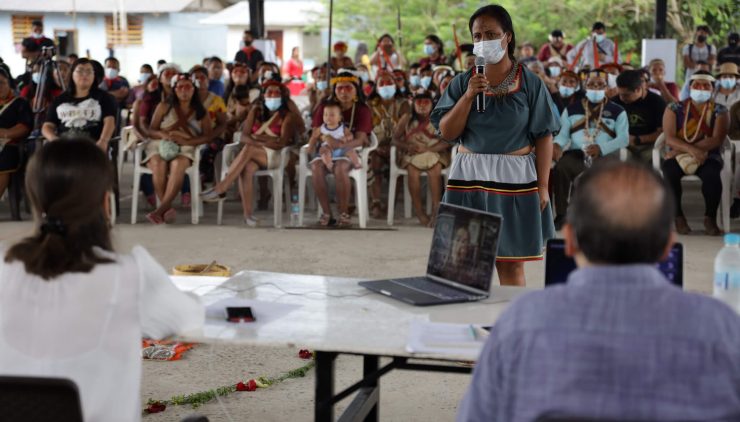 The Vance Center Environment Program facilitated the presentation of an expert amicus brief in support of the constitutional rights of two Indigenous communities before the Constitutional Court of Ecuador. These landmark cases will set important precedents concerning Indigenous groups’ ability to exercise self-determination rights against extractive projects in the Amazon. They also mark the first time that Ecuador’s highest court has convened within the territory of an Indigenous community.

Todd Crider and Rafael M. Loureiro of Simpson Thacher & Bartlett, in consultation with the NGO Amazon Frontlines, prepared a brief on behalf of University of Colorado Law Professor James Anaya, former UN Special Rapporteur on the Rights of Indigenous Peoples. The brief relied upon Professor Anaya’s expertise in international law and the rights of Indigenous peoples.

The territories of the Waorani Community and Sinangoe Community of the A’i Kofan People are among the most biodiverse in the world, and their forests play an important role in regulating the regional and global climate. Both communities have prohibited mining and oil extraction on their lands without their consent. However, their lands and sovereignty are threatened by both illegal and state-sanctioned gold mining and petroleum extraction, while Ecuador’s President Guillermo Lasso has promised to double extractive activities. Mining in these territories has been increasing in volume and violence in recent years, resulting in land and water pollution, biodiversity loss, and attacks on Indigenous communities.

At a hearing on November 15, five justices of the Constitutional Court traveled by canoe down the Aguarico River to Sinangoe territory. There, they heard testimony from several Indigenous communities in relation to the Sinangoe community’s claim. In moving speeches, Indigenous representatives explained how the preservation of the Amazon environment is integral to their way of life and communal autonomy. One elder explained how “our land is everything”, while another leader commented that “mining in our sacred territories is like mining in the ancient ruins of Rome or the Notre Dame in Paris”.

The Waorani and Sinangoe communities argued that the mining activities violate key provisions of the Ecuadorian constitution. First, the mining violates the Rights of Nature itself, which are uniquely protected in Ecuador’s constitution. Secondly, it violates the rights of Indigenous communities, including their right to free, prior, and informed consent (FPIC) concerning resource extraction in Indigenous and adjacent lands. The Ecuadorian government has granted mining concessions without seeking the consent of the communities (or consulting adequately), despite the obvious impacts on their livelihoods.

The Waorani and Sinangoe communities called on the Constitutional Court to explicitly recognize a right to FPIC under Ecuadorian law. Because the Ecuadorian Constitution directly incorporates international law, international legal standards play a central role in this claim. In his brief, Professor Anaya explained how international instruments such as the United Nations Declaration on the Rights of Indigenous Peoples, the American Declaration on the Rights of Indigenous Peoples, and Convention 169 of the International Labor Organization, provide rigorous standards that states must follow in consultation with Indigenous peoples, as well as baseline rights that must be secured whether or not consent is provided.

The Vance Center Environment Program is also working to prepare a brief in another case before the Ecuadorian Constitutional Court concerning widespread pollution resulting from an oil spill.