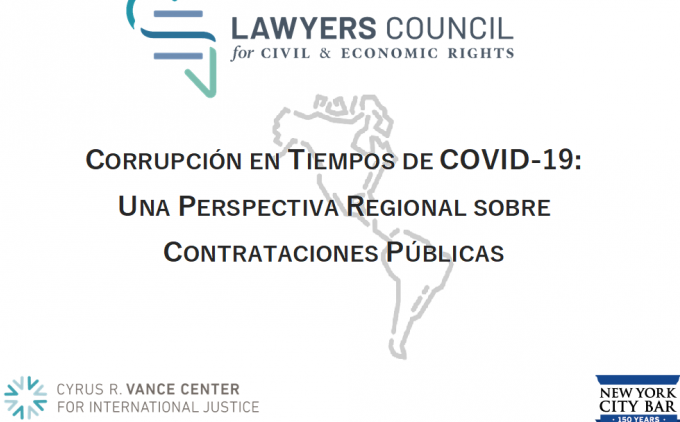 Media throughout the Americas took note of the report Corruption in Times of COVID-19: a Regional Perspective on Public Procurement produced by the Vance Center’s Lawyers Council for Civil and Economic Rights. The American Lawyer,  Reforma and Eje Central in Mexico, El Periodico in Guatemala, and Acento in the Dominican Republic noted the report.

The New York City Bar Association had issued a press release on the report, which is available in English, Spanish and Portuguese. It summarizes the exceptional legal measures of regional governments in response to the pandemic, particularly in public procurement, and highlights the resulting corruption risks. The report cites notable civil society and media initiatives to monitor government responses to the pandemic.

The Lawyers Council commissioned the report soon after the pandemic arose, by inviting its members from 14 Western Hemisphere countries to describe the legal actions of their governments. At the report’s conclusion, the Lawyers Council calls on the legal community throughout the region, including lawyers in the private sector (both law firms and companies), bar associations, pro bono clearinghouses, and law schools, to be vigilant and active in support of anti-corruption efforts relating to COVID-19 and to work in support of civil society actors who are leading the fight for transparency and fairness.

The report underscores that, despite genuine efforts, existing mechanisms to combat corruption in the region are insufficient. Most countries already had serious corruption risks, and relaxing controls over public procurement has created new vulnerabilities to corruption. Indeed, at a time when society most needs credible institutions to marshal national resources to confront the health and economic consequences of the pandemic, loosening existing safeguards threatens a further loss of legitimacy and squandering of limited resources. The reports also highlights the work of civil society organizations and the media to identify and make public the misuse of resources destined to combat the pandemic. In several countries, allegations of corruption have already resulted in resignations and dismissals of high-level elected and public officials, the report found, although these cases remain the exceptions that signal the increased risks.

The Lawyers Council for Civil and Economic Rights brings together private practice law professionals in the Americas to combat corruption and to support the rule of law and the work of the civil society. The Lawyers Council consists of 18 lawyers from 14 countries, distinguished in private legal practice nationally and regionally, with demonstrated civic commitment.