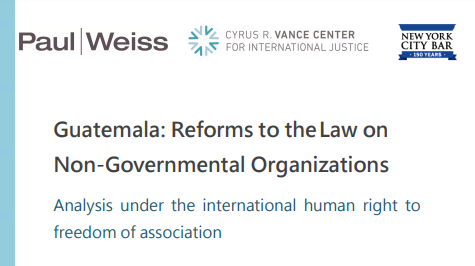 The New York City Bar Association recently issued a press release on the report Guatemala: Revisions to the Law on Non-Governmental Organizations, produced by the international law firm Paul Weiss and the Vance Center for the Alliance for Reforms in Guatemala. The report reviews the pending changes to Guatemalan law in light of international human rights law, including: the government’s heightened control over NGOs and greater discretion to de-register them; new criminal and civil liability for directors of NGOs; and increased and onerous reporting requirements.

The Alliance for Reforms in Guatemala commissioned the report for its effort to challenge the constitutionality of the revisions. The Alliance is a coalition of thirty-five civil society organizations, including human rights, international, women’s rights, and indigenous people’s rights organizations, as well as research centers and urban groups that share an agenda of social change to strengthen democratic rule of law in Guatemala.

The report observes that many of the specific changes are similar to restrictions in the legislation of other countries that have previously been struck down by courts or condemned by human rights organizations as violating freedom of association. The report studies standards from the United Nations human rights bodies, including the Human Rights Council, Human Rights Committee, and United Nations Special Rapporteurs, as well as regional organizations like the Inter-American Court on Human Rights, African Commission on Human and Peoples’ Rights, the European Court of Human Rights, and the European Commission for Democracy through Law.

According to the report, the Guatemalan revisions threaten to hinder the formation of new NGOs and discourage NGO opposition to policies and practices of the government. The changes also may not have been properly legislated and are too vague, giving the government wide discretionary power to invoke “public order” to restrict freedom of association, without clearly defined and tailored limits for its application, the report finds.

The report follows other Vance Center efforts in Guatemala, including the report Judicial profession and conduct in Latin America for the Association of Guatemalan Judges for Integrity, a workshop for 50 judges of the association on how multinational companies conduct transnational business, and delegations of U.S. and Latin American business lawyers to Guatemala in 2013, 2014 and 2019 to examine the judicial selection process.